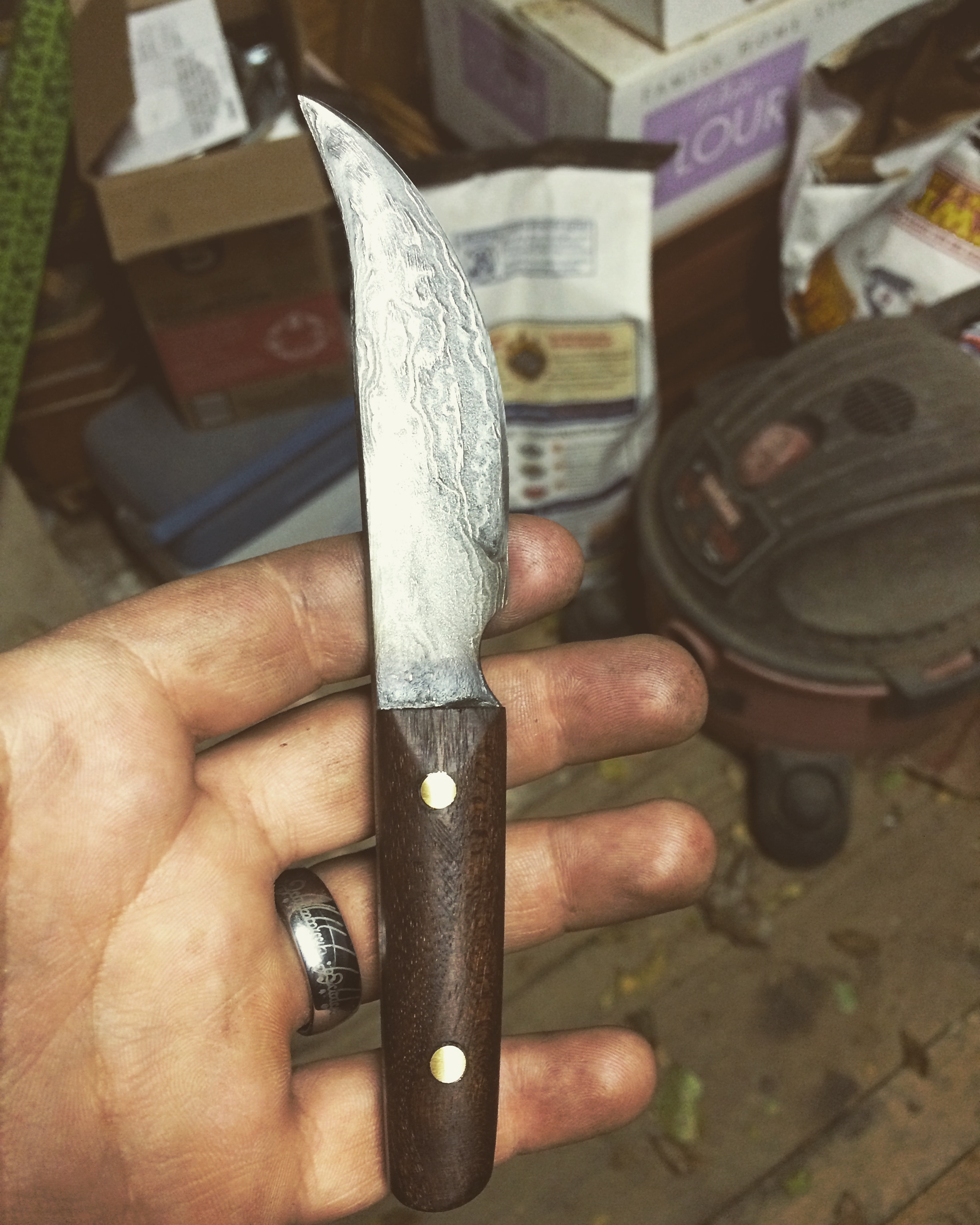 We love to see innovation when it comes to making knives.  We are always on the lookout for new and creative knife artisans,  and we found someone that we figured you all just had to see.
We found BenSwapp while browsing through Reddit, head over to his page and check him out.  He has tons of impressive stuff in the works, but the one that caught our eye was the knife he made using 2 wrenches. After seeing his impressive knife, we knew we needed more info on both the knife and the man that created it.  So we contacted him with a few of our own questions.
1.  What got you interested in knives?
-When I was eight or nine, I watched Conan the Barbarian and in the beginning of that movie they forge the father sword I wanted to do that.
2.  What made you decide to try and create your own?
-I really just wanted to hit on red hot steel. My family is in the trucking business and we would build our own trucks and we would modify them. sometimes you had to cut a bolt off with a cutting torch and the head would be red hot.  I would run to get a hammer to smack on it.
3.  Where did you get the idea for your knife?
-My brother-in-law wanted a neck knife.   So he asked me to make him one.   So I made a small bowie style.   Everyone liked the shape so I wanted to make another one but I wanted it to be pattern welded steel.
4.  How did you go about creating your knife?  I.E. Steps you took.
-To make the knife I used two Chinese wrenches a 5/8 and a 9/16. I thought “well that’s tool steel it should make a good knife”. First on each wrench, I forged the jaws shut and the box ends shut as well, then I folded each one in half and forge welded each of them. Folding each wrench and forged welding them about 12 times. I said 24 but I thought about it and remembered it wasn’t that many. Then I stacked the two wrenches on top of each other and forged them together then forged out the blade.
5.  What’s next on your work bench?
-Well, I finished two other bowie knives, a rasp knife which everyone hates on the handle, And the second one I will be posting soon. But next is cable Damascus knife.
6.  Do you have any advice for someone just starting to create their own knife?
-Don’t get caught up in all the fancy tools. Slowly build your forge. Buy a hammer and something to heat up steel, coal or propane. Get something to hit the steel on. Railroad track is always good. Watch videos read books. It’s all about practice, practice, practice.
7.  What is your favorite knife?
-My favorite knife is the one Aragon carries in the Lord of the Rings I would love to make something like that.

So there you have it.  A peek inside the mind of a true knife innovator.   I don’t know about all of you, but I can’t wait to see what he comes up with next.
Are you working on a knife you would like to share?  Let us know, and maybe we will feature you and your knife in the future.  Feel free to discuss in the comments below.  Until next time, get out there and keep creating!

One thought on “Knife Made From 2 Wrenches”