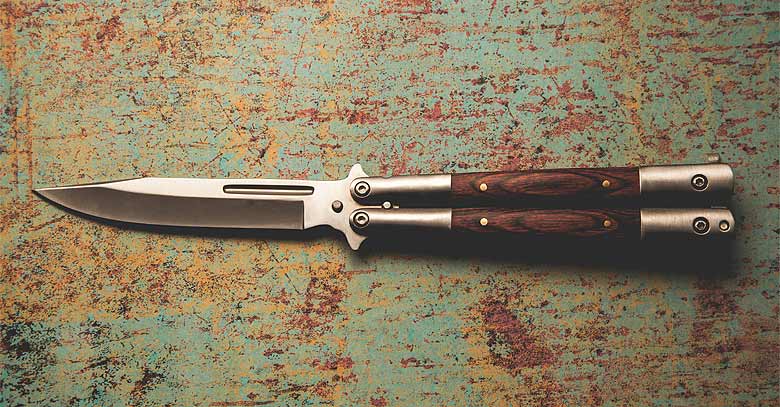 Like me, I’m sure many of you have wondered “Why are there so many laws regarding butterfly knives”?  For some reason, there seems to be quite the stigma when it comes to butterfly knives.  But why?  What causes some places to outlaw these knives entirely?  Unfortunately, the answer to this is not an easy one or even one singular answer at all.  From what I have found, it seem to be a culmination of a bunch of different things that cause this awesome knife to be treated so negatively.

First and foremost there is the stigma that the butterfly knife is synonymous with crime?  Between 1981 and 1984 hundreds of thousands of butterfly knives were imported into the U.S.  Shipped from places like the Philippines, Japan, China and Korea.  Unfortunately, due to the sudden influx of knives, knife related crimes rose rather drastically during those times.  In an effort to try and control the crimes being committed, many places outlawed the knife, hoping to stem the tide.  However, once the knife became less of a novelty, its use in crimes dropped off.  However, lawmakers did not see this as a reason to once again allow the use of these knives.  In their minds, the knives were and always would be, used for crimes.  It may seem ridiculous, but we can thank Hollywood for keeping up the stigma.

Too often butterfly/balisong knives are used for very violent reasons in films.  Take for instance Hit-Girl in the film Kick-ass.  She is a vigilante that uses this type of knife in very violent ways.  And this is just one example of how these knives show up in films.  Too often they are depicted in the hands of muggers and gangsters.  Further cementing the idea that that’s all they are used for.  Which, of course, we all know is wrong.

Lastly, there is the idea that these knives pose a very real danger to the people using them.  In 1981-1984, when the knives really made their way over here, people were seeing an influx of visits to the E.R.  After some investigation, they found that a large number of these emergency room visits were due to self-inflicted knife injuries.  What that boils down to is, people were learning to flip these knives for recreation.  As part of the learning curve, they were nicking and cutting themselves, requiring a visit to the hospital.  The powers that be figured the only way to try and cut down on these types of things was to outlaw the knives.  Don’t worry, it doesn’t make sense to me either.  Now we have people, still flipping and cutting themselves, but because they could get in trouble, they don’t go to the doctor after cutting themselves.  Sounds safe.

Ultimately, the laws regarding these knives are outdated and miss-informed.  But, regardless, they are still laws.  Until we can show the general populace that these knives really aren’t that dangerous, please continue to follow the laws.  However, there are no laws regarding trainers.  So if you still want to learn to flip, but laws in your area prohibit it, get yourself a nice trainer.  These provide the excellent opportunity for you to enjoy “almost” everything flipping has to offer.

In case you are curious about butterfly knife laws in your area, check out this Wikipedia page.  It has some pretty great information about what is legal where, and how.

Have any more questions?  Let us know in the comments.  We always enjoy hearing from you!

One thought on “What makes Butterfly Knives Illegal?”