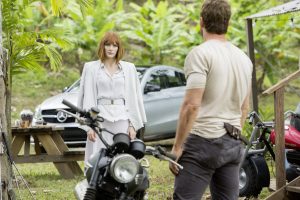 Ok, maybe I am a little ashamed to admit it, but I have seen Jurassic World 3 times now, and I am considering seeing it a fourth.  A bit obsessive I know, I realize I have a problem.  It’s just such a fun movie, I can’t help myself. 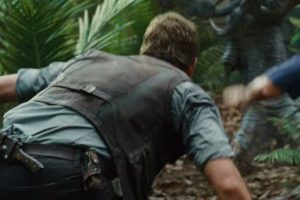 Anyway, being a knife enthusiast, every time I see it I try to spot any knives I can.  There is one obvious stand out, and that’s the knife Owen uses.  If you haven’t seen the movie, don’t read any further, but if you have maybe you can help me figure it out.

The very first time we see the knife, it’s when Owen is training his raptors.  It is hooked to his belt clip, as you can see in the picture below. 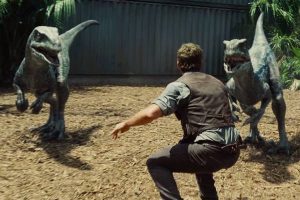 The knife is pretty much on his belt the entire film, he rarely takes it out of the sheath, so it is difficult to really pinpoint the style and design of the knife itself.  The knife itself does get a little screen time though, when Owen uses it to escape from the Indominous Rex.  Diving under a car, he uses the knife to cut a line in the car, dousing himself with fluid to mask his scent.  I’ve tried my best to really pay attention at this part, and try and lock down what knife it is.  Unfortunately I have not been able to come up with one specific knife.  So I decided to look around the internet, in the hopes that someone else may have been able to nail down the exact knife that it was. 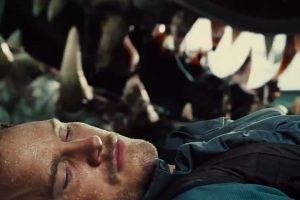 In my searching, I found this thread on bladeforums.com.  Mosty of the users involved in this discussion agree that it is definitely a custom made knife.  From what I could find, the knife was made by professional knife maker, Steve Auvenshine.  His film credits include Abraham Lincoln: Vampire Hunter, Sleepy Hollow, and Master and Commander: The Far Side of The World.  So the knife was definitely made by an experienced craftsman.    I was a little disappoint, in that I really wanted to be able to purchase said knife somewhere, but I was also super excited to see custom made knives make their way to the silver screen.  I love when I can see a hardworking knife maker get the attention he or she deserves.   It’s a beautiful knife, one I would definitely want attached to my belt if I had to fight off a geneticly modified hybrid dinosaur.

So what do you guys think?  Is it in fact a custom?  Or have you seen this knife for sale somewhere else?   I think it’s only a matter of time before we see a cheaper, knock off version of this knife for sale.  Would you consider purchasing it, or making it yourself?  As always, let us know in the comments below.  We love to hear from you!  And don’t forget to head over and get yourself a new knife.  You never know when you will need to fight a 65 million year old dinosaur.  It’s best to be prepared.