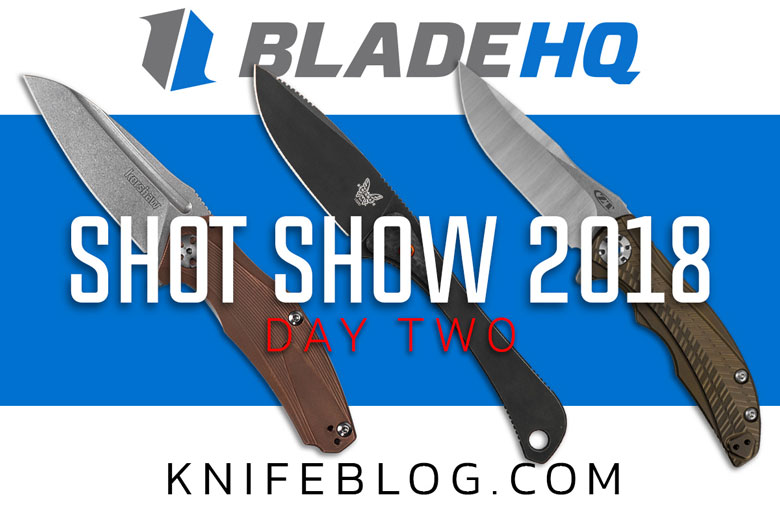 Day two of SHOT Show 2018 dawned bright and early, with the promise of glinting steel, beautiful lines, and silky smooth action in the air. Our team hit the floor and got busy, visiting with all the best and brightest in the industry so that you, dear reader, could share in the feast. Behold, Blade HQ’s coverage of SHOT Show’s second round.

We’ve been anticipating some of the new Benchmade knives for a while, but getting to see them in person made it worth the wait. Some of the standouts were the 495 Vector AXIS-Assist, with a gorgeous symmetrical-grind, spear point blade and handy safety lock; and the 417 Fact, with a pleasingly slim profile, tactical aesthetic, and ultra-deep carry clip.
One of the most anticipated releases is the Altitude fixed blade from the Hunt Series. Meant as an ultralight hunting knife option, it is noticeably pared down, yet it has some pretty sleek lines and practical details—such as the grippy carbon fiber bolsters. The edge-holding capacity of the S90V steel doesn’t hurt, either. Check out Zac’s entire interview with Benchmade in the vid below.
﻿

Remember CRKT’s introduction of Field Strip technology in 2017? The ability to easily break down, clean, and reassemble your knife in the field has been so popular that several designers jumped at the chance to collaborate with CRKT and create and expansion line. The Field Strip line includes James Williams’ fierce Goken, Jesper Voxnaes’ rugged HVAS, and Dew Hara’s futuristic Raikiri.
One of the knives that drew the most attention at the CRKT booth was the Philip Booth Ripsnort. With a stout, ready-for-action sheepsfoot/cleaver blade and sleek handle design, the Ripsnort achieves both utility and refinement in one package. There were a few other exciting additions to the CRKT line, so make sure to check out the full video below.
﻿

Dude. Spyderco brought it to SHOT Show this year. Zac’s interview with them was a long one, but every second was filled with cutting edge delight. Right out of the gate, the new ClipiTools (Standard and Rescue) show some ingenious design and innovation. Featuring a large utilitarian blade with several smaller tools integrated in the handle, all the tools feature Spyderco’s trademark hole and effortlessly slide out with one hand. An added detail that blew our minds was the way that the tools create finger choils when closed, adding to the ergonomics and control of the handle.
Another standout was the Mantra 3 (not available yet, *sniff*), which improves upon its predecessors with a stronger lock, lighter weight, better ball-bearing mechanism, AND a more affordable price. Who can argue with that?
Finally, watch to the end to see a surprise knife, a new Paysan, from designer Peter Rassenti.
﻿
There’s so much more where that came from, guys. Make sure to check back and see coverage of the next couple days of SHOT Show 2018, and follow our Instagram and YouTube accounts for constant updates as the show unfolds. Don’t forget to visit our Coming Soon page to see all the new knives from the show, and preorder or jump on the wishlist for your favorites.
Click here to read SHOT Show 2018, Day 1.
Click here to read SHOT Show 2018, Day 3.