How would you like to have a knife 65 million years in the making?  You may say it’s impossible, but believe me when I say “Knife finds a Way”.  Ok, all Jurassic joking aside, have you ever heard of knives inlaid with Dinosaur bone? 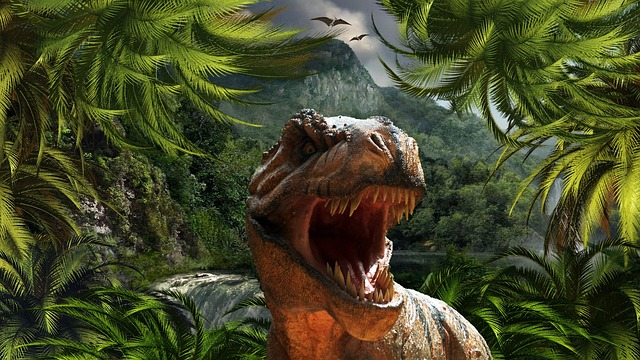 After watching the movie, I couldn’t help but do a quick google search for “Dinosaur Knife”, but I was not expecting to find what I did.  Several knife artisans are making knives with Dinosaur bone handles.  How cool is that?  You can have a knife made from actual brontosaurus!  That’s not all.  If you are looking for something more 1650 BC, you can get knives made with Wooly Mammoth teeth.

Tons of knife artisans are offering some really impressive knives, made with fossilized handles.  Now, I know what you are thinking.  Does it actually stand up as a knife?  Let me put it this way-

In a catastrophic, blinding flash, the space rock strikes the face of the earth, forever altering life.   After most of the vegetation on earth begins to die off, the triceratops is desperately seeking any kind of food, but unfortunately, it’s time has ended.  It lies down, never to rise again.  Slowly, its bones are covered in sediment and become fossilized.  It lies there for millions and millions of years, until what remains of it is unearthed.

So ultimately, its bones have survived attacks by some of the most impressive predators in earth’s history, earth changing events, and millions of years in the ground.

So will it stand up as a knife?  After all that, do you really need an answer?    I doubt you can do anything as catastrophic as a 6 mile wide meteor striking earth.  So yeah, it stands up as a knife!

This material will “stand the test of time”, if you will.

Ok.  I know I have geeked out pretty hard over dinosaurs, thanks for sticking with me.   But seriously, this knife material is just too awesome to ignore.

Or maybe you are more interested in, not a knife made of dinosaur, but instead a knife ready to hunt dinosaurs.  If you were stranded on Isla nublar, which knife would you want with you?  Would you want your trusty Survival Axe?  Or maybe you would rather a trusty EDC?  Or, if you want to take the Dino’s on head on, warrior style, why not go with the good ‘ole Battle mace?   Head over and get geared up Jurassic style!