It was pointed out to me recently that quite a few manufacturers use serration patterns that are unique to their companies. In all honesty, I hadn’t given serrations that much thought before then. We got to wondering what each serration pattern has to offer and why it was selected in the first place, so I did some digging, and as you might guess, there are actual philosophies behind each serration pattern.
This post isn’t exhaustive as far as brands go, but I was able to get in contact with someone at each of the locations you see listed below whether a technical writer, engineer, or owner. Each person I got in contact with had lots of understanding and knowledge, and they were each able to give me great insight into their company’s serration philosophy.
It’s a lengthy post, but I tried to make it easier for you to navigate by pulling the key points out from each brand. There are a some that will look similar to each other, but each serration pattern you see is slightly different from the others for a specific reason. Happy reading! 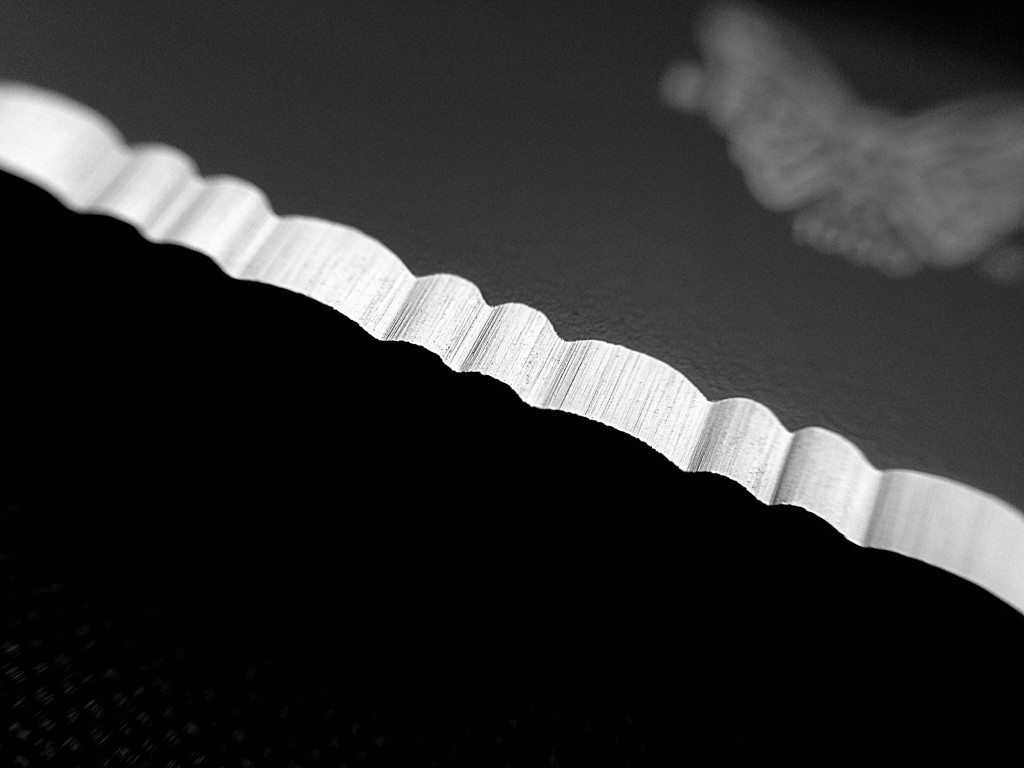 “Our standard serrations are all designed around a combo edge style of blade processing, which is the most versatile.  It leaves ample blade for slicing, while including an inch and a half or so of serrations for sawing.  The goal is to grind the points of the serrations as sharp as possible, and at an angle that makes them sharp, yet durable, while still looking aesthetically pleasing.  We can alter the angle of the serrations to tailor them to each individual blade, though we rarely change the pattern itself.”
(The 178 SOCP dagger is an exception, as that tool has a very specific function, and Benchmade designed the serration pattern to fit that model and its function.) 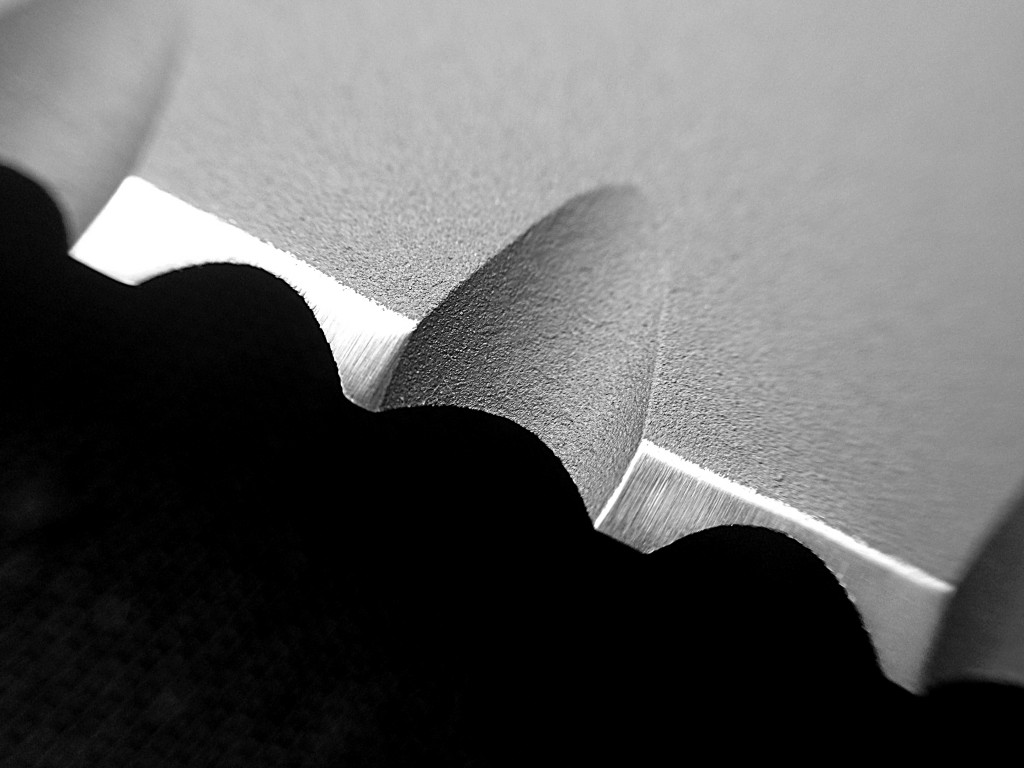 Pattern: wide serrations cut at a 50° angle
Why: easy cleaning and effective cutting
CRKT uses a few different serration patterns: Triple Point, Veff Serrations, and Veff Flat Top Serrations. When you think of CRKT serrations, though, this might be the pattern that comes to mind: 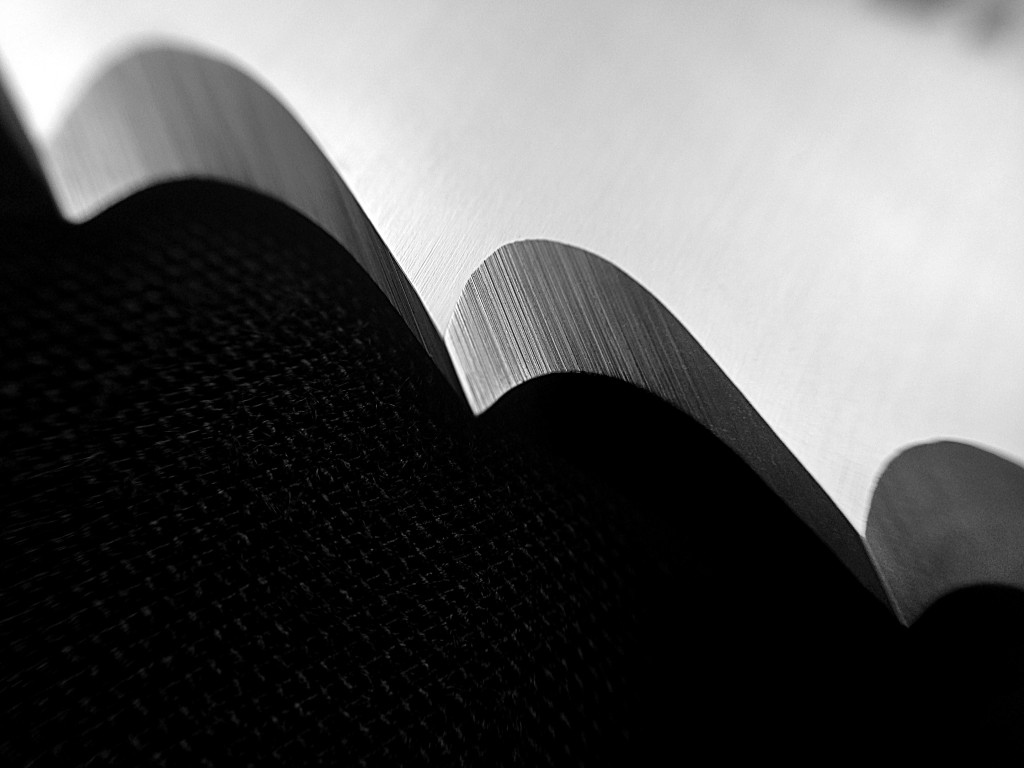 These are Veff Serrations.
Ben from CRKT said, “We introduced Veff Serrations in 2006.  The concept was developed and patented by the world’s one and only edgeologist, Tom Veff.  This guy is a blade edge expert. Tom invented Veff Serrations that look wicked awesome, cut great and are super easy to sharpen compared to Triple Point serrations . . . They’re dramatically better at cutting rope, webbing, straps, etc.”
Veff Serrations are available exclusively at CRKT, and it’s a very distinctive pattern that’s easy to recognize. In this YouTube clip, Veff discusses his philosophy on serrations. Here’s what he had to say:
“Veff serrations came about because of a frustration of standard style serrations sticking and dragging and catching in material. So you’ll notice these have a distinct feature. First of all, they are not cut at a 90 degree angle that is customary to most serrations; they are cut at about a 50 degree angle. This produces a self-feed effect. You’ll also notice that they are broad and wide open, which allows them to clean easily. Once the point pierces the material, it bites instantly and digs deep and feeds the material into the hollow of the serration which is surgically sharp and severs the material.”
If you watch the clip, you’ll see that “self-feed effect” means that material doesn’t slide away from the serrations, but into them instead.

Pattern: serrations with a consistent, equal diameter
Why: easy to sharpen and functional 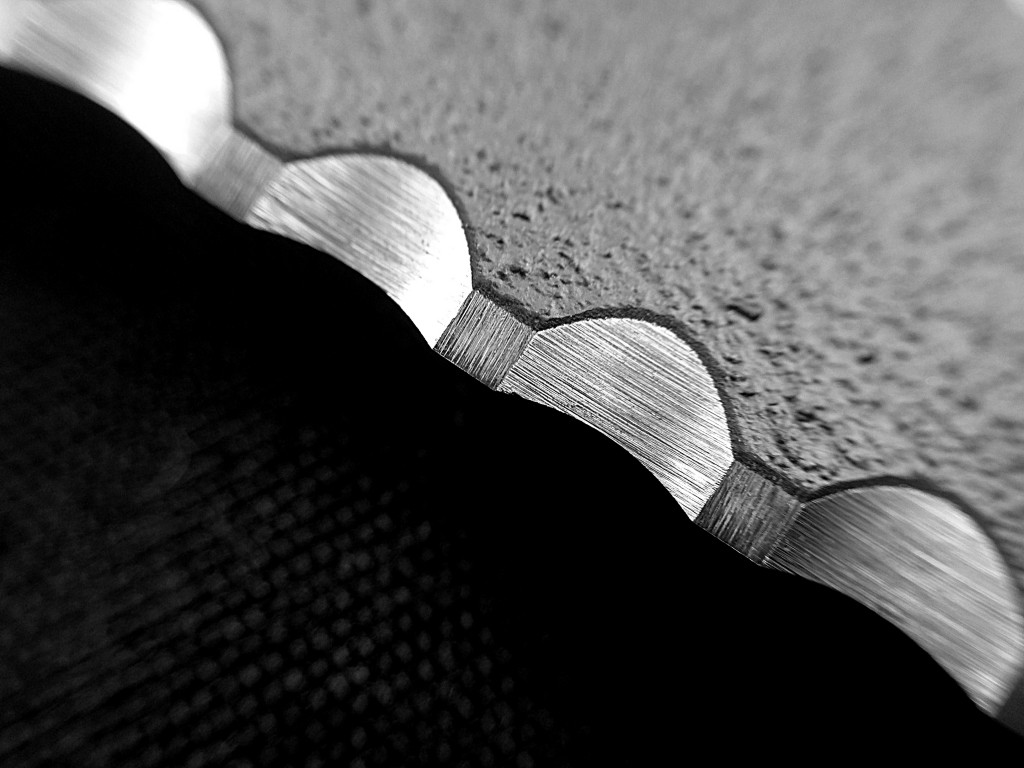 “[Our serrations are the same diameter all the way down the serration so that a user can sharpen them with a round stone if they desire to, but there is no use in doing that—they are not designed to be sharpened on the radiused area. Instead, all the user has to do is sharpen the knife as they normally would and it will sharpen the serrations. The reason for this is a serration only really cuts at its corner, so when you use a flat hone to sharpen the rest of the edge, you are actually sharpening the corners of the serration.  . . . They are the most functional design we have found.]”

Pattern: one large scallop followed by two small scallops
Why: stays sharp longer and has an effective, aggressive cutting cycle 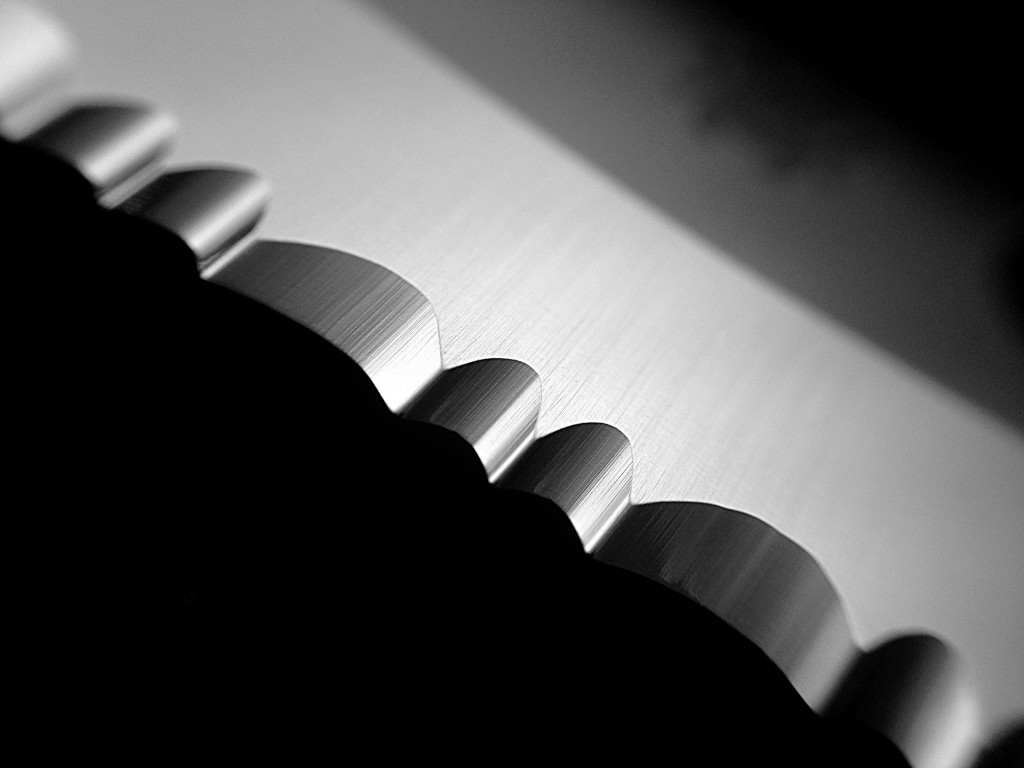 “Spyderco’s interest in serrated edges goes back to the very origins of the company in the late 1970’s—before we made knives. At that time, the company’s founder Sal Glesser focused on selling our first product—the Spyderco Sharpmaker. Since it was the first sharpener designed to effectively sharpen both plain and serrated edges, Glesser spent a lot of time demonstrating its use on different types of serrated edges. In the process, he learned a lot about which serration designs worked, which didn’t, and why.
“After developing an in-depth understanding of the extreme cutting potential of serrated edges, Glesser set about designing the optimal serrated edge. After extensive experimentation with different tooth patterns and sizes, he found that a pattern consisting of one large scallop followed by two small scallops outperformed everything else. The convex radius inside each scallop creates an infinite number of cutting angles, while the serration teeth penetrate the material and generate an aggressive cutting cycle that is extremely effective—especially on hard-to-cut fibrous materials. The serration pattern also packs more linear cutting edge into a given length of blade than a plain edge, and, thanks to its scalloped design, protects the recessed areas of the edge from dulling. The result is an edge that stays sharper much longer than a conventional one. 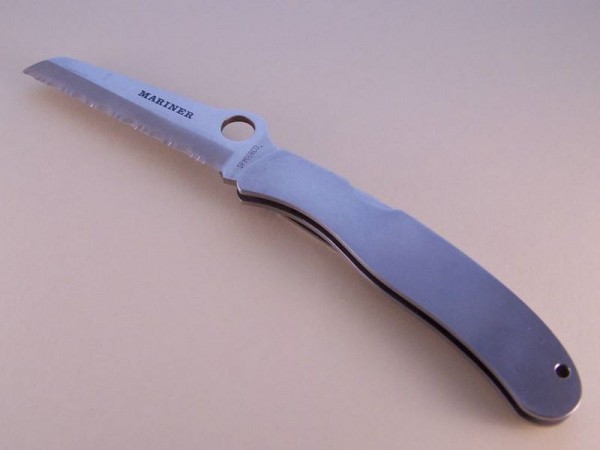 (Photo courtesy of Paul Beretta)
“Spyderco introduced this high-performance serrated edge—ultimately known as the SpyderEdge™—in 1982 with the Mariner model and became the first company to incorporate a serrated edge into a modern folding knife. Popular with sailors, the Mariner model also became an immediate hit with law enforcement personnel and first responders and thus pioneered the concept of the modern ‘rescue’ knife.
“Today Spyderco continues to be a leader in the industry with regard to serrated edges, incorporating our high-performance serrations into our mainstream utility models and specialized knives like the Jumpmaster™ (designed for military parachute operations) and the Whale Rescue Blade™ (designed for rescuing entangled marine wildlife).”

Do you have a brand preference when it comes to serrations? What brand do you think makes the best serrations?
If you’ve been wondering about something totally different than serrations, let me know. I get a lot of my ideas for posts because of things my co-workers talk about, so let me know if you’ve got a question or suggestion for a blog post, and I’ll do the best I can to make a stellar post out of it.
Check back more Friday for more awesome knife content and have a great weekend!