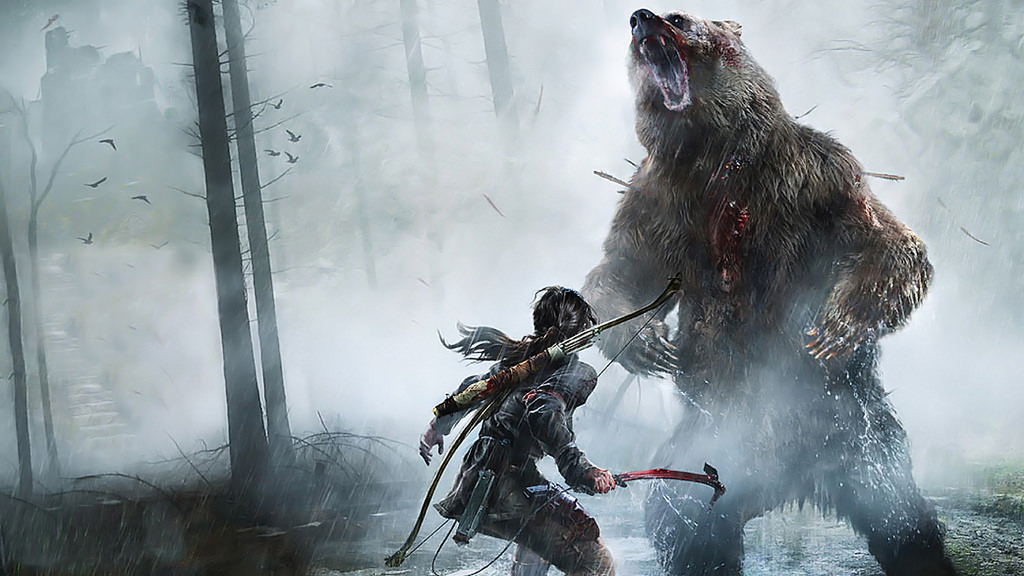 Over the past week or so, I have been working my way through ‘Rise of The Tomb Raider”.  I know, I’m a little bit behind.   I just recently acquired the “Tactical Knife” In game, and I immediately wanted to share it with all of you.

I have been playing the Tomb Raider games since Lara’s trip to Atlantis back in 1996, and I have played almost all of them since, with the exception of a few of the spin-offs.   As a born knife guy, I have always found it odd that Lara relied so heavily on her duel pistols, when a knife seems like an absolute must in anyone Raiding Tombs.  So, needless to say, I was so happy to see one show up in the latest installment of the franchise.

About halfway through the game, Lara stumbles upon what is labeled “Soviet Tactical Knife”.   The knife is a fixed blade, with partially serrated edge.  The blade is 6 inches, coming to a total of 11 inches in length.  The knife is made from Steel, with a black hilt and forest green sheath.

All in all, it sounds like a pretty cool knife, and something I myself would consider carrying.   As the game progresses I developed mixed feelings about the inclusion of the knife.  While I was excited about the inclusion of a Tactical blade, I did start to feel like the knife was underutilized.  Basically it was used for either stabbing bad guys, or looting pelts from dead animals.  I kind of felt that the knife got a bum rap.  Tactical knives can be used in a plethora of different survival situations.

While fixed blades can be great for hunting and skinning prey, or defending yourself, they are also great for many other things.  Being cold is a big staple in the game.  It seems like Lara is constantly shivering.  Each checkpoint comes in the form of a “Camp”.  Basically small fires where you can upgrade your gear.  I would have really liked to see Lara build these fires. Fixed blades can be great for wood processing and fire starting, so there was no reason she shouldn’t have been able to do this herself.  At one point, Lara makes herself a small shelter but, unfortunately, she doesn’t utilize her fixed blade.   She basically just pulls a few branches together and makes a hut.  While this would be nice, it isn’t at all practical.  A big fixed blade can be great for cutting down branches and such to fashion your own shelter.  These are just a few examples, there are plenty more.  But we want to hear from you.

So I wanted to know what you all thought about the inclusion of the knife in this installment of the Tomb Raider series.   Is this the kind of knife you would want with you in this type of survival/exploration situation?   Or is there a different, more appropriate knife you think would serve Lara better?  We want to know what you are thinking.  Feel free to share your opinion in the comments below.