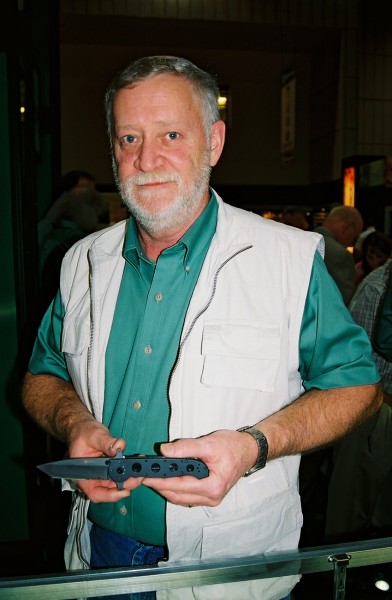 I’m sure most of you have heard by now that Kit Carson passed away last weekend on September 5, 2014. He was a great man and knife maker, so I wanted to highlight his life today.

Life and Background
Harold Joseph “Kit” Carson grew up in Georgia and was always interested in any and all things mechanical. He also enjoyed the beautiful outdoors of North Georgia as he grew up and as he spent time in the wild as a hunter and fisherman. When you have a man who loves mechanical things and the outdoors who also makes knives, you know he’s destined for greatness.
In 2012, Kit was inducted into the 2012 BLADE Magazine Cuterly Hall of Fame. He was unable to accept the award in person, but Rod Bremer accepted it in his place and read the following excerpt from a letter Kit had written:
“I’ve carried that passion to find innovative and creative things to make things work better throughout my life.  After high school I served a four-year apprenticeship here in Atlanta, finishing in 1972. That year I started making knives and I was also drafted into the Army.  . . . It was during my last 10 years in the Army that knife making became extremely interesting and a challenging hobby and a passion. Those were extremely rough years, long hours as both a soldier and knife maker while always trying to ensure that our kids had a sandwich and a lunchbox. Working in small sheds, basements, garages, or wherever I could find space in government housing, off-post apartments, and houses, to grind a blade shape, a handle, or try to figure out how a locking mechanism worked.”
From this section of his speech, you can learn a couple of different things about Kit. First, this Kentucky knife maker served in the Army. He served for 20 years, and he retired from the army as a master sergeant in 1993. Since ’93, Kit has been a knife maker full time, and he’s done great work since then thanks to his astounding dedication to the industry, among other things.

Contributions to the Knife World
Aside from his induction to the Hall of Fame, Kit accomplished a lot during his career as a knife maker. He is probably most recognized in the knife world for popularizing flippers in folding knives via the CRKT M16 series.
There doesn’t seem to be a clear consensus on who invented the first flipper, but it seems like most people acknowledge that it had been made prior to the M16’s production. However from what I’ve heard from others and read on knife sites and forums, it’s very clear that Kit is the knife maker credited with breathing life into the flipper and helping it reach the popularity it has gained today.

Why the M16 is an Iconic Knife 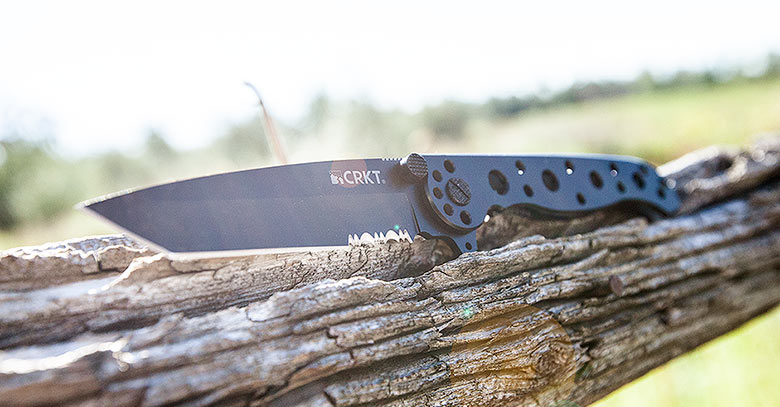 Last week we did a post on the most iconic knives, both historical and brand specific. We put a survey on the Blade HQ Facebook page to get input on what you all thought the most iconic knives were. When we asked what knife came to mind when you think of CRKT, the most popular response by far was the “CRKT M16.”
As stated earlier, the M16 was designed by Kit Carson. The M16 is obviously an iconic knife, and there’s a reason why. I wanted to get an opinion on why the M16 is so popular from someone who knows what they’re talking about, and who better to ask than CRKT’s Ben Petersen? I asked him why he thinks the M16 has become one of CRKT’s most well-known knives, and here are his thoughts on it:

“Here’s my take on the M16:  We released the original M16 in 1999.  It happened to be the perfect confluence of events, all packaged into one knife:
·         “No frills—it just works and works for a long time
·         “Affordable—your average soldier or layman can afford one and feel good about using it—no safe queens in the M16 line.
·         “Released 2 years before the U.S. entered two major wars in the Middle East.  We sent hundreds of thousands of M16s to the Sandbox.  Again, a soldier could afford one and could afford to replace it if it got lost.
·         “It has a manly and tough look and feel in the hand.  It’s got heft and handles well.  Plus it’s comfortable to use.
·         “Featured the Carson Flipper—a feature that Kit Carson popularized and the CRKT M16 solidified as a staple opening mechanism in the knife industry.
·         “Variety.  We have released over 50 models of M16.  There’s something for everyone and every task.
·         “Kit Carson was just a darn nice fellow.  He was a good ‘ol boy that was down to earth and kind to people.  The longevity of the knife is often a reflection of the quality of the maker—great folks sell more knives.”

Kit Carson lived to the age of 63.  We in the knife community are lucky to have his designs by our side to use and remember this great man’s life.