Knives can come in quite handy, but only if you own one. There are many miraculous survival stories that wouldn’t have been possible without an edged tool. Take Aron Ralston for example; his story is perhaps one of the most well-known accounts of survival today, but it wouldn’t have had a happy ending without a multi-tool. While canyoneering, Aron’s arm became trapped under a dislodged bolder. After several days, he was able to finally free himself by amputating his arm with a multi-tool. Aron was trapped for five days and seven hours, or a total of 127 hours. (Does that number ring a bell?)
This story of survival is truly amazing. Some other survival stories are simple but no less meaningful. Last month, a police officer in New York used a knife to help free a trapped deer.  The deer was tangled in some Christmas lights behind the officer’s mother’s home, and he quickly responded.
The cop is a hunter, but he said that he felt sorry for the deer, so he set it free. Below is a YouTube clip of the officer freeing the deer. Partway through the clip, he  whips out his knife and proceeds to free the deer.
Can anyone identify this knife? We think it might be this Smith & Weson Baby S.W.A.T. (My apologies for the blurry image.) 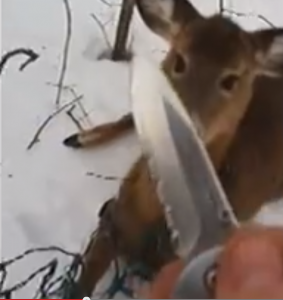 It’s a pretty heart-warming story, even if you don’t like animals. Again, the cop was able to respond quickly because he was carrying a knife. You really never know when you’ll need your knife.
I know knives come in handy on a regular basis, so I want to know—when has your knife been there for you? And what knife was it? Let us know! We want to hear your stories.

3 thoughts on “Knives are Survival Tools”