Have you ever been somewhere and you needed to sharpen your knife, but you didn’t have your sharpener nearby?  Well, after looking around I have found a few helpful knife hacks that can help you with that.  The first knife hack we are going to look at is “The bottom of a ceramic plate or mug can sharpen your knife”.  At first I was skeptical, so I knew I had to try it. 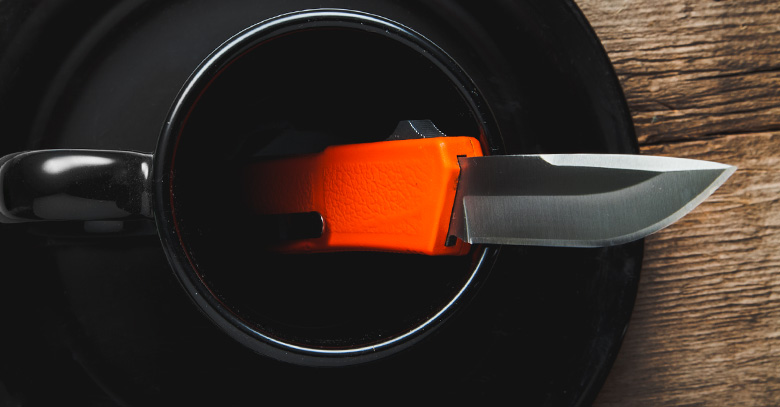 I have an old Lightning OTF that I mainly use as a letter opener now.  As of late, the knife has gotten pretty dull.   It will start off slicing the letter open, but about halfway through it would snag and pretty much just rip it the rest of the way.  I figured this was a great knife to test the theory (and now I finally had a reason to use all those un-opened credit card offers you get in the mail.)

Before I tested the theory I decided to try the knife first, just so I had a “before” example.  As you can see, it started off fine, then it pretty much just started to tear through the envelope.  Not a big deal, but not very ideal.  I would much rather prefer a knife slice through it easily, and without ripping and tearing.

So, to start, I grabbed a ceramic plate from the kitchen.  I flipped the plate, so the bottom was facing up.  On the bottom of most ceramic plates is a small ring on the base.  This is the area you want to use to sharpen the knife.  I ran the blade across several times, using my best judgment to decide when enough was enough.  You need to be careful, if you do it too much you can damage your knife.

After several times across, I decided it was time to test it again.  I’ve got to admit, I was rather surprised by the result.  It worked!  It was by no means sharpened with an actual sharpener, but it still worked.  There was a considerable, noticeable difference.  It still started to snag a little bit halfway through the paper, but nowhere near as bad as before, eventually it cut right through the snag and kept going.

Ultimately, I would rather sharpen my knives with an actual knife sharpener, but in a pinch this method would be able to get me through.  It only took a few minutes to produce a noticeable difference in the sharpness of the blade.  This is one knife hack I will definitely end up using in the future.

Check back later while we continue to explore these (hopefully) useful knife hacks!    Do you have a knife hack of your own?  Let us know!  We would love to test it out!