There are a lot of Guinness World Records that everyone is familiar with—fastest one mile run, longest fingernails, etc. But there’s some crazy (and random) stuff out there:  fastest 100m on a skateboard by a dog (19.678 seconds); most Big Macs consumed (23,000 and counting, achieved by eating Big Macs daily for 37 consecutive years); longest duration living in a room with scorpions (33 days, and the woman was stung 13 times); and most toilet seats broken by the head in one minute (46).
Records that revolve around knives are a little harder to find, but here are a few I thought were interesting.

Most Knives Thrown Around a Human Target in One Minute

In 2007 Dr. David R. Adamovich, A.K.A. The Great Throwdini, threw a total of 102 knives around a human target in one minute (I wonder how long it took him to find a partner…). Adamovich also holds a number of other world records. You can see him in action in the YouTube video below.

(This is not in the Guinness Book of World Records that I know of, but it should be!)
According to my research, a knife maker named Buster Warenski made the most expensive modern knife. It’s called the “Gem of the Orient,” and it originally sold for $1.2 million to the buyer, who later sold it for $2.1 million. What makes it so expensive? Oh, I don’t know—it might have something to do with the nine diamonds (5 carat), the 153 emeralds (10 carat), or the 28oz. of 18k gold that make up the knife. The Gem of the Orient is pictured below on the left. 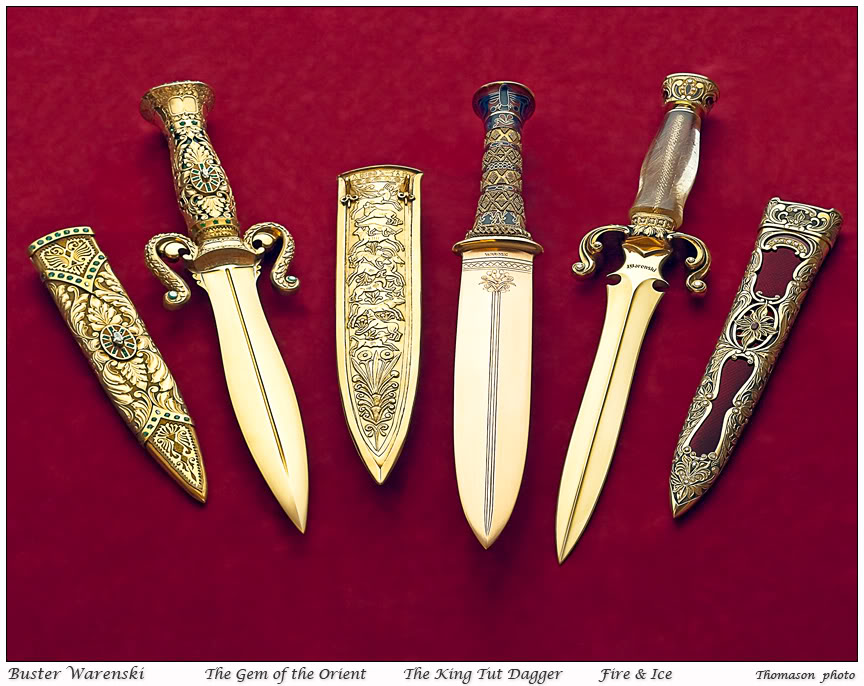 The Wenger Giant Swiss Army Knife earned the title of “most multifunctional penknife” from Guinness World Records in 2008. This knife has 87 tools, and it measures almost 10 inches across. Is this an inconspicuous companion for your keychain? Maybe not. 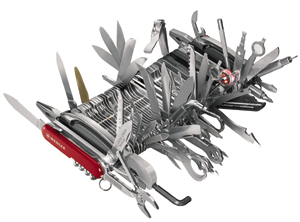 You might be thinking there’s a typo in the title of this section, and that it really means the most swords swallowed by a person, but there’s not a typo; this section is actually about a sword that has been swallowed the most. The “Sword of Swords” has been swallowed by 40 different sword-swallowers. That might gross some people out (including me), but if you’re not afraid of swallowing a sword, then germs probably aren’t going to give you the heebie jeebies.
One of the 40 sword-swallowers is Natasha Veruschka—she has a world record for the most swords swallowed simultaneously by a female (13), and longest sword swallowed (22.83 inches). Ouch.

The world’s smallest knife is actually a micro-knife. It is only able to slice items that are 300 nanometers thick. You can view an image of it and read all about it here.

Be sure to check back every Friday for more knife content, and let us know if there’s anything you’d like to see a post on. Have a great weekend!