Throw traditional life out the window? Move to Montana to make knives? Sure thing. That’s James Behring and he’s reviving the fixed blade game for a new generation of collectors. The founder of Behring Made Knives has the type of all-American story that just feels right: go West, manufacture in America and don’t compromise on quality. His fledgling fixed blade knife company is a rising star in a corner of the industry that’s full of old greats, but few dark horses. 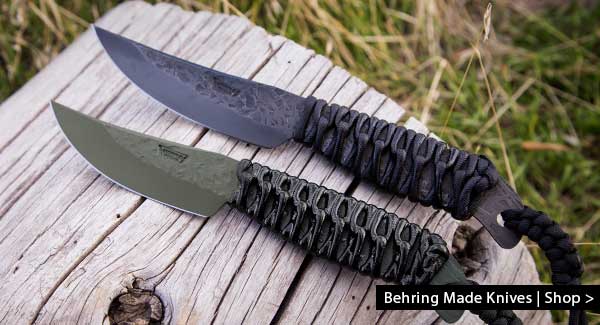 Behring grew up in Michigan in the 90s. He took the traditional route into college and graduated as an English major. But James has knives in his blood and it’s hard to get away once you’re in. He bought his first Randall knife in ’96 and his dad is Jim Behring, the founder of Treeman Knives. After college, James started working with his dad doing much of the the front end work for Treeman Knives: customer service, orders, answering calls, keeping the place running from the business side. He was making 150 knives on his own every year and helping Treeman make another 750. Despite buying a house and settling down, James wasn’t settled at all. He’d had enough of Michigan and all it took to get him out of the Midwest was a girl from Montana. He ditched the bad hunting in MIchigan, wrote a business plan and started Behring Made Knives in Missoula.

Behring Made Knives in Montana

James doesn’t have wi-fi at his house. No big deal. He’s got it at the shop and he’d prefer to be out scouting elk anyway, rather than scoping out Instagram. It’s a chill culture over there at Behring Made: he and his crew only worked one week in September this year, choosing instead to hit the bow hunting season hard all month. That’s a big deal to him. He’s got a tight team and a loose schedule in the shop; they’re more like family than co-workers. No one yells. No one fights. They work hard, then play hard.

For James, making knives isn’t about being a hard-core artist. He spent three months as a custom maker, but says, “I got lonely and would spend 3-4 hours a day on the phone with customers.” Rather than a boutique custom joint, he turned the business into a well-oiled knifemaking shop with three guys cranking out 150-200 knives a month. He’s focused on customer service and making sure he treats people right. He saw where other custom makers were falling short in the industry and filled the gap with a whole lot of, “Just treat people right.” Behring Made Knives are guaranteed for life and they’ll redo custom orders if a customer simply doesn’t like the way it turned out.

The Future of Behring Made Knives

James has been doing fancy private shows at hunting lodges in Montana. Customers that own his hunting knives include several big name celebrities (ask him about it sometime off the record), but he sees huge potential for company growth in gifting knives. Four groomsmen at your wedding? Behring Made will hook them up right with a fixed blade knife. Need that special steak knife set for your multimillion dollar hunting lodge in Montana? Yep, they do that too. They’ll even throw some giraffe bone on it to make it special for you and your squad. But let’s be honest, no one’s building a business solely on customized steak knives; Behring Made’s honey hole is in well-built, affordable fixed blade knives like the Pro LT.

For James Behring, he’s looking at the long game. It’s not about about making 150 art pieces a year. He’s shooting for collectability and a secondary market that values and flips his products. To do that, he needs to scale and create enough products for the masses. With orders coming in for runs of 80 knives, he’s getting there. The Wall Street Journal called a couple years ago and an LA news station stopped by recently to shoot a story on one of his employees for Veterans Day. He’s five years into the knifemaking game on his own and his crew is solid. Now, if he can keep the cougars and bears out of his front yard in Montana, he’ll be set.

One thought on “Doing it Right in the USA: Behring Made Knives”