A lot of the things I write come about because I have a question and then I’m like, “Hey, I’ll write a post about that.”—that’s pretty much what happened with this post.
Although I couldn’t care less about celebrity gossip (sorry, I have my own life to live), I was curious if there were any celebrity knife knuts out there. After far too much digging around, I finally found some info—more than I expected, actually.
Lots of people online were saying that this celebrity or that celebrity was a knife knut, but they hardly ever cited  a source. So, here’s everything I found, and I made sure to cite or link to sources in case you’re interested in them. This isn’t meant to be an all-inclusive list, and you should also know that if I couldn’t find sources to back up certain celebrity-knife speculations, I didn’t include them because that wouldn’t be doing you any favors. Take a look at what I found: 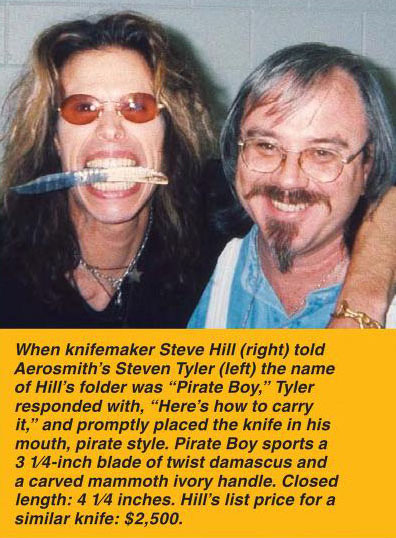 The sidebar in this article has some great info. Below are the celebrities that are highlighted in it:
Aerosmith- Joe Perry and Steven Tyler like both Ken Onion’s and Steve Hill’s work. (That’s Steve pictured above with Steve Hill.)
Ted Nugent (“Motor City Madman”)- This American rock musician is a hunter and therefore uses knives regularly. He has also used Outdoor Edge knives, and (at least at one point) had a Swiss Army Knife that was made with his name on it.
Country Musicians Willie Nelson, Randy Travis, Blake Shelton, and William Lee Golden (The Oak Ridge Boys)- Blade says these guys are all knife enthusiasts. William Lee Golden also apparently visited a BLADE Show.
Elvis Presley, Chet Atkins, and Artie Shaw (1940s band leader)- Blade says these guys collected knives.
David Crosby (Crosby, Stills & Nash), James Taylor, Billy Gibbons (ZZ Top), the late Stevie Ray Vaughan, and Keith Richards (The Rolling Stones)- Just a few more rock stars that collect knives.
You can also watch a YouTube clip of Joe Perry with his knife below. The knife is introduced at about 20 seconds in:

It looks like Perry is using a custom version of this knife.

After using a Ken Onion custom knife in his film Exit Wounds, Seagal was a changed man (my words, not Ken’s). After that, he became a huge collector.

So I guess that settles it; even celebrities can’t resist a nice-looking blade. Feel free to list other knife knut celebs in the comments. Add links if you can!
Have a great Labor Day weekend, everybody.

One thought on “Celebrity Knife Knuts”