With nearly 700 tables and more than 300 booths the BLADE Show has thousands and thousands of knives to debut this year. This show promises to be bigger than ever, and be sure to stay tuned for all the excitement.
The show officially starts rolling June 3rd at 12:00 pm, but we have some sneak peeks just for you.
Spyderco 2016 New Knives
This afternoon, Spyderco launched their mid-year product guide and they have 11 new knives to debut at BLADE. The Byrd line is also getting 1 new knife this year.
The Spyderco Advocate is a new knife from custom knifemaker Gayle Bradley. Bradley is an expert knifemaker that has spent a ton of time working and testing various blade steels. He says that his preference is CPM-M4 and he convinced Spyderco to use his favorite steel in this new flipper folder. The knife also features a Reeve Integral Locking mechanism and a titanium handle with “orange peel” textured finish.
The Rubicon 2 is the second iteration Peter Carey’s Rubicon folder. This version will be more wallet friendly.
The Magnitude is another new Peter Carey knife based on his custom Magnitude. This version will include 3D machined twill carbon fiber handles. With ball bearing washers and a flipper mechanism, this knife should flip like a dream.
The EuroEdge is a brand new Ed Schempp design from the king of the ergonomic handle. This knife was designed to pay homage to the blade fuller, which was the secret to the strength of many European swords and daggers.
The Ouroboros has been on a lot of people’s radar for a while, and it is finally getting a release. This knife will feature Spyderco’s compression locking mechanism made famous in the Paramilitary 2. This knife looks like it will have a ergonomic handle, with a finger choil that will give excellent control over the blade.
The Reinhold Rhino is a compact little knife that will also feature the compression lock and a CTS BD1 steel blade.


The Sage 5 continues the tradition of the Sage folder sharing a portion of the proceeds of the knife with the Alzheimer’s Association. Each of the Sage series knives has a different locking mechanism, and this time the Sage 5 celebrates Spyderco’s own compression lock.

The SpydieChef is part of Spyderco’s salt series of knives featuring corrosion resistant blades. This one is crafted from LC200N an extremely corrosion resistant nitrogen-based steel.
The Spyderco Jumpmaster 2 is an update from the original and is also part of the salt series featuring H1 rust proof steel. This version also has a leaf profile blade shape.
The Spyderco Sustain looks like a formidable fighting knife designed by Stuart Ackerman.
The Spyderco Junction is another Gayle Bradley design ideal for backpackers, hunters, and outdoorsmen. This knife looks very versatile.
FREE KNIVES from Blade HQ! 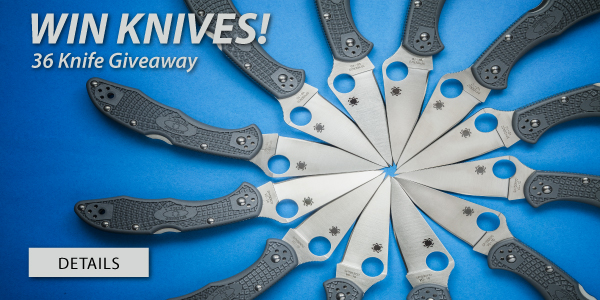 This year Blade HQ is giving away 36 knives during BLADE! You can enter to win three different ways:

One thought on “Blade Show 2016: Stay tuned for all the newest knives”